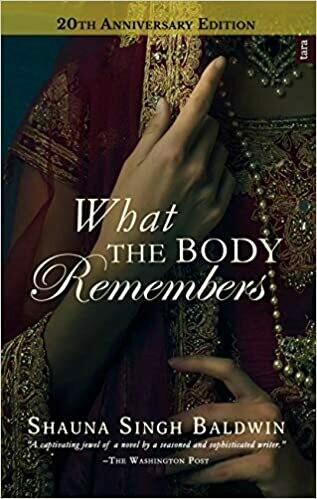 Out of the rich culture of India, and the colonial era that gave rise to the tumultuous 1947 Partition, comes this lush and eloquent novel about two women married to the same man.

Sixteen-year old Roop, a village girl whose mother has died, is elated when a wealthy Sikh landowner sends an oer of marriage. Though deep in debt, her father is reluctant—Oxford-returned Sardarji has a first wife, childless Satya. But Roop persuades him, believing she and Satya will be friends. Once married and in Rawalpindi, Roop finds friendship with Satya is elusive. Their relationship turns ominous. Satya resorts to desperate measures to maintain her place in society and her husband’s heart, and, as his beloved Punjab lurches toward Independence Day, Sardarji struggles to find his place amidst drastic religious divides.

Shauna Singh Baldwin is the author of three novels ­­- What the Body Remembers, The Tiger Claw and The Selector of Souls. Her short fiction collections are English Lessons and Other Stories, and We Are Not in Pakistan. Her awards include The Writers’ Union of Canada prize for short fiction, the CBC Literary Prize, The Friends of American Writers Prize the Commonwealth Prize for Best Book (Canada and Caribbean), and a shortlisting for Canada's Giller Prize. Shauna received her MBA from Marquette University, and her MFA from the University of British Columbia. Her play, We Are So Different Now premiered in Canada in 2016. Reluctant Rebellions: new and selected non-fiction was published in 2016. She is working on another novel.