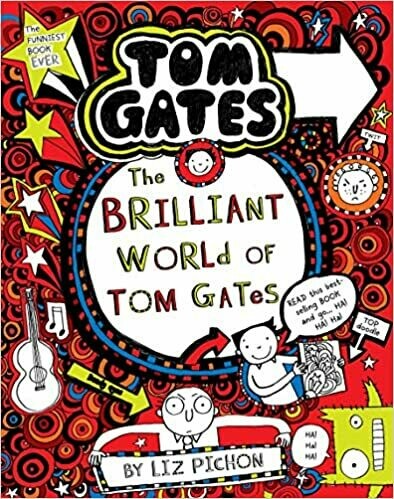 Tom Gates No -1: The Brilliant World of Tom Gates

Tom Gates. He's an ordinary 10 year old who has deep passion in Art, Music, Excuses, annoying sisters (such as Delia) and Amy Porter(his crush). He dislikes Marcus Maldrew, Delia, Teachers and School. But the thing is, in order to impress Amy Porter and get those Dude3 (his favorite band) concert tickets, he has to be on a good behavior and at the same time keep his school profile chill. His Band, the Dog Zombies, play their first act and it turns out... well I don't want to spoil it. Follow Tom as he goes through 5th grade, whether he makes it through or not, and towards the final step to middle school. Find out in The Brilliant World of Tom Gates by Liz Pichon, a book of Comedy, Courage and Art.

L. Pichon says that when she was little, she loved to draw, and her mom said she was very good at making a mess (this is still true today). She kept drawing, went to art school, became a designer and art director at Jive Records, and began to publish children’s books. After its publication in the U.K., The Brilliant World of Tom Gates won several prestigious awards, including the Roald Dahl Funny Prize, the Waterstone’s Children’s Book Prize, and the Blue Peter Book Award. L. Pichon lives in Brighton, England, with her family.
Save this product for later