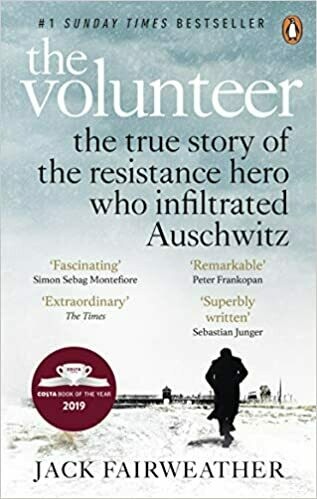 The Volunteer: The True Story of the Resistance Hero who Infiltrated Auschwitz – Costa Book of the Year

Summer 1940: Witold Pilecki, a Polish underground operative, accepted a mission to uncover the fate of thousands interned at a new concentration camp, report on Nazi crimes, raise a secret army and stage an uprising. The name of the camp- Auschwitz.

Over the next two and half years, Pilecki forged an underground army within Auschwitz that sabotaged facilities, assassinated Nazi officers, and gathered evidence of terrifying abuse and mass murder. But as he pieced together the horrifying Nazi plans to exterminate Europe's Jews, Pilecki realized he would have to risk his men, his life, and his family to warn the West before all was lost. To do so meant attempting the impossible- but first he would have to escape from Auschwitz itself...

Jack Fairweather is a British writer and former war reporter in Iraq and Afghanistan, and the author of A War of Choice, The Good War and The Volunteer. He splits his time between the UK and Vermont.
Save this product for later