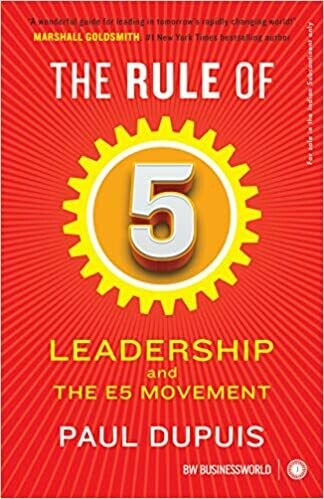 The Rule of 5: Leadership and The E5 Movement

From a young Backpacker sleeping on a Park bench in Japan to becoming a senior leader of one of the biggest corporate giants in the world, Paul dupuis has built a career through game-changing leadership—crafted through his own experiences as an athlete, volunteer and CEO.

The E5 formula discussed in the rule of 5 is both familiar and fresh. It’s a leadership model built in the spirit of ‘standing on the shoulders of giants’, learning from leaders like konosuke matsushita, the founder of panasonic, who put ‘empathy’ and ‘enable’ at the core of his leadership approach; Jack Welch with his 3es, who then inspired Bob McDonald at P&G to craft his own version of the 5es; and Jim Collins, who shared his version of level 5 leadership in the book good to great with execution at the core.

The E5 movement is a call to action to all leaders worldwide to lead with impact. The five es are: envision, express, excite, enable and execute. These five rules of leadership are both timeless and Borderless. The real-life anecdotes, combined with the conversational tone of the book, make this an accessible and impactful read. Thought-provoking and practical, this book will inspire leaders to think about their own leadership, adopting the five es on their mission to lead their teams to excellence true game changer. Pick your five and join the movement!.

PAUL DUPUIS is CEO and Managing Director of Randstad India and the former Chairman of HOPE International (JP). Paul is Canadian and bilingual; he speaks both English and Japanese, and has lived and worked across Asia for more than 25 years. He is an avid athlete, with a particular passion for ice hockey and volunteering.
Save this product for later