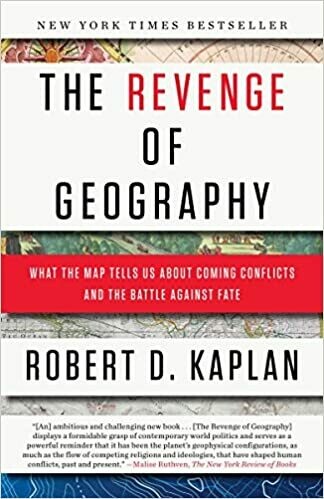 The Revenge of Geography: What the Map Tells Us About Coming Conflicts and the Battle Against Fate

ABOUT THE REVENGE OF GEOGRAPHY

NEW YORK TIMES BESTSELLER • In this provocative, startling book, Robert D. Kaplan, the bestselling author of Monsoon and Balkan Ghosts, offers a revelatory new prism through which to view global upheavals and to understand what lies ahead for continents and countries around the world.

Bestselling author Robert D. Kaplan builds on the insights, discoveries, and theories of great geographers and geopolitical thinkers of the recent and distant past to look back at critical pivots in history and then to look forward at the evolving global scene. Kaplan traces the history of the world’s hot spots by examining their climates, topographies, and proximities to other embattled lands. He then applies the lessons learned to the present crises in Europe, Russia, China, the Indian Subcontinent, Turkey, Iran, and the Arab Middle East. The result is a holistic interpretation of the next cycle of conflict throughout Eurasia, a visionary glimpse into a future that can be understood only in the context of temperature, land allotment, and other physical certainties. A brilliant rebuttal to thinkers who suggest that globalism will trump geography, this indispensable work shows how timeless truths and natural facts can help prevent this century’s looming cataclysms.

Praise for The Revenge of Geography

“[An] ambitious and challenging new book . . . [The Revenge of Geography] displays a formidable grasp of contemporary world politics and serves as a powerful reminder that it has been the planet’s geophysical configurations, as much as the flow of competing religions and ideologies, that have shaped human conflicts, past and present.”—Malise Ruthven, The New York Review of Books

“Robert D. Kaplan, the world-traveling reporter and intellectual whose fourteen books constitute a bedrock of penetrating exposition and analysis on the post-Cold War world . . . strips away much of the cant that suffuses public discourse these days on global developments and gets to a fundamental reality: that geography remains today, as it has been throughout history, one of the most powerful drivers of world events.”—The National Interest

“Kaplan plunges into a planetary review that is often thrilling in its sheer scale . . . encyclopedic.”—The New Yorker

Robert D. Kaplan is the bestselling author of eighteen books on foreign affairs and travel translated into many languages, including Earning the Rockies, In Europe’s Shadow, Asia’s Cauldron, The Revenge of Geography, Monsoon, The Coming Anarchy, and Balkan Ghosts. He is a senior fellow at the Center for a New American Security and a senior advisor at Eurasia Group. For three decades he reported on foreign affairs for The Atlantic. He held the national security chair at the United States Naval Academy and was a member of the Pentagon’s Defense Policy Board. He is currently a member of the U.S. Navy’s Executive Panel. Foreign Policy magazine twice named him one of the world’s Top 100 Global Thinkers.