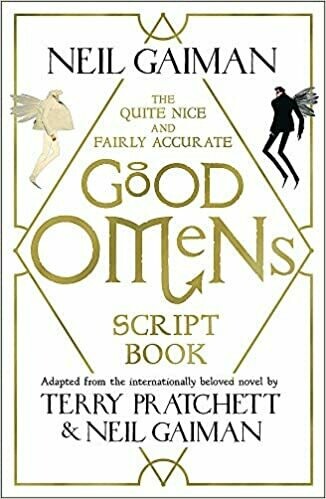 The Quite Nice and Fairly Accurate Good Omens Script Book

Before he died, Terry Pratchett asked Neil Gaiman to make a television series of the internationally beloved novel they wrote together about the end of the world.

What followed was almost... ineffable. Over six glorious episodes, Neil brought an angel, Aziraphale, and a demon, Crowley, (the only things standing between us and the inevitable Armageddon) to life in some of the most extraordinary television ever made.

Here you will find the scripts that Neil wrote, containing much that is new and revelatory and even several scenes throughout that never made the final cut. For the very first time, this edition collects all the missing bits - from a certain Other Four Horsemen to a little demonic shopping trip - and reveals the secrets of the show, which, by its very nature, is known to ask for the impossible.

Step backstage and see the magic for yourself.

Neil Gaiman is the bestselling author and creator of books, graphic novels, short stories, film and television for all ages, including Neverwhere, Coraline, The Graveyard Book, The Ocean at the End of the Lane, The View from the Cheap Seats and the critically acclaimed, Emmy-nominated television adaptation of American Gods. The recipient of numerous literary honours, Neil has written scripts for Doctor Who, worked with authors and artists including Terry Pratchett, Chris Riddell and Dave McKean, and Sandman is established as one of the classic graphic novels. In 2017, he became a Goodwill Ambassador for UNHCR, the UN Refugee Agency. As George R. R. Martin says: 'There's no one quite like Neil Gaiman.'
Save this product for later