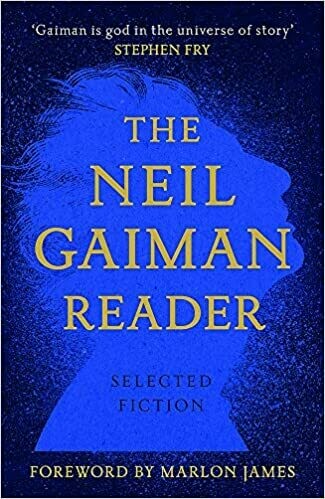 A captivating collection of fiction from one of the world's most beloved writers, introduced with a foreword by Booker Prize-winning author, Marlon James.
With a writer as prolific as Neil Gaiman, where do you begin? Or how do you know what to try next? Spanning his career to date, this collection of ambitious, groundbreaking and endlessly imaginative fiction will be your guide.
Curated within this book are nearly fifty of Gaiman's short stories and novellas, interposed with excerpts from his five novels for adults - Neverwhere, Stardust, American Gods, Anansi Boys and The Ocean at the End of the Lane.
It is both an entryway to his oeuvre and a literary trove Gaiman fans old and new will return to time and again. Start where it suits you. There aren't any rules.

Neil Gaiman is the No.1 Sunday Times and New York Times bestselling writer of books, graphic novels, short stories, film and television for all ages, and is known for creating extraordinary worlds beyond imagination. He has been awarded numerous literary honours and many of his books have been made into films and adapted for TV and radio. In recent years, Neil wrote and was the showrunner for a critically acclaimed television adaptation of Good Omens, the seminal novel he co-authored with the late Sir Terry Pratchett. He has also written two episodes of Doctor Who and appeared in The Simpsons as himself.
In 2017, Neil became a Goodwill Ambassador for UNHCR, the UN Refugee Agency. He received a Doctor of Letters from the University of St Andrews, is a Professor in the Arts at Bard College and is a Royal Society of Literature fellow. Born in the UK, Neil now mostly lives in America, and travels all around the world every year appearing at festivals, events and conventions.