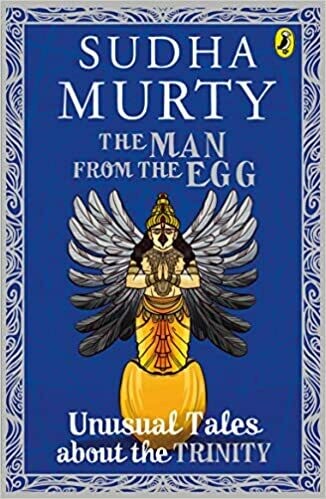 The Man From The Egg: Unusual Tales About The Trinity

Did you know that Brahma once had five heads?

Why does Shiva sport a crescent moon in his hair?

The Trinity, consisting of Brahma, Shiva and Vishnu, is the omnipresent trio responsible for the survival of the human race and the world as we know it. They are popular deities of worship all over India, but what remain largely unknown are some of their extraordinary stories.

Award-winning author Sudha Murty walks by your side, weaving enchanting tales of the three most powerful gods from the ancient world. Each story will take you back to a magical time when people could teleport, animals could fly and reincarnation was simply a fact of life.

Sudha Murty was born in 1950 in Shiggaon in north Karnataka. She did her MTech in computer science, and is now the chairperson of the Infosys Foundation. A prolific writer in English and Kannada, she has written novels, technical books, travelogues, collections of short stories and non- fictional pieces, and six bestselling books for children. Her books have been translated into all the major Indian languages. Sudha Murty was the recipient of the R.K. Narayan Award for Literature (2006), the Padma Shri in (2006) and the Attimabbe Award from the Government of Karnataka for excellence in Kannada literature in (2011).