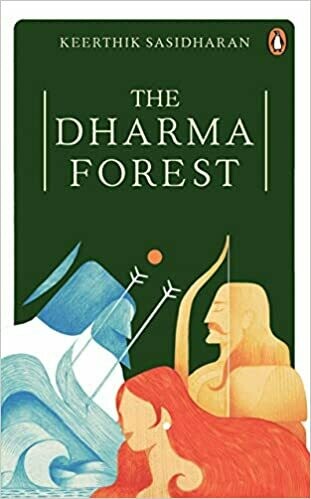 As the Mahabharata war wages on, it shows no mercy and takes no prisoners. Death and destruction abound.
In the midst of a world rendered unrecognizable by the lust for power, malice and the machinations of war stand Bhishma, contemplating the immeasurable death he sees around himself as a man who cannot die, Draupadi, above and beyond the chaos and yet at the very centre of it, trying to protect her husbands at any cost, wondering whom to trust, and Arjuna, beloved, conflicted and melancholic in equal measure, uncertain of the ultimate cost of the war
he is intent on winning. The Dharma Forest is a magnificent first novel in a trilogy filled with complex characters, conflicted loyalties and erotic jealousies from India's most beloved epic.

Keerthik Sasidharan was born in Palakkad, Kerala, and was trained as an economist. His writings have appeared in various publications, including as a columnist for The Hindu and Open magazine. He lives in New York City.