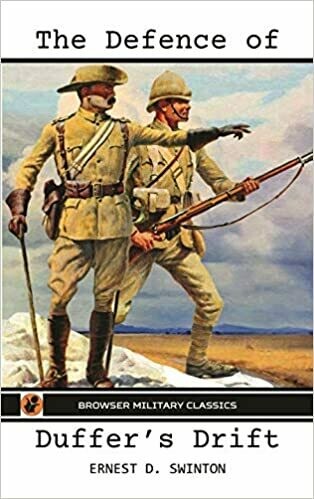 The Defence of Duffer's Drift

A short treatise on the art of tactical warfare, set in the Boer War (1899-1902), this classic piece of military fiction was published by Major General Ernest D Swinton when he was still a captain in 1904. The appropriately named Lieutenant N. Backsight Forethought (BF), a rookie commander of a platoon of fifty is tasked with defending a river crossing—Duffer’s Drift. Manifested in six dream scenarios and actions of a mortified BF, who learns a series of “lessons” at his expense, his final unconventional defence succeeds in routing the Boers. The book quickly acquired cult status on small unit tactics, and armies across the world have had it on their required reading lists for subsequent generations of young officers, including in India. It has also been translated into several languages. Swinton's style of literary fiction significantly impacted the writings of several authors in the military arena. While some contextual advice may be dated, the emphasis on critical thinking remains relevant, and the principles are evergreen. A must-read!