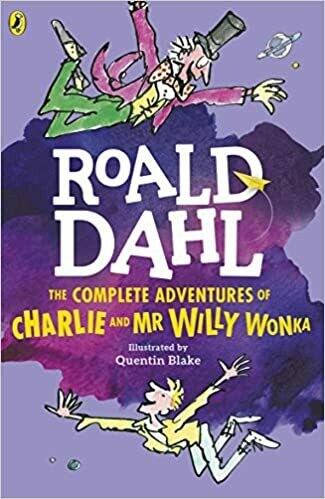 The Complete Adventures of Charlie and Mr Willy Wonka

Charlie and the Chocolate Factory and Charlie and the Great Glass Elevator together in a single bumper volume with phizz-whizzing new Roald Dahl branding!

In CHARLIE AND THE CHOCOLATE FACTORY, Mr Willy Wonka opened the gates of his amazing factory to Charlie Bucket, our hero, and four repulsive children. They are Augustus Gloop (greedy), Veruca Salt (spoiled), Violet Beauregard (gum-chewer) and Mike Teavee (TV addict).
Next, in CHARLIE AND THE GREAT GLASS ELEVATOR, Charlie and his family find themselves orbiting the Earth with Mr Willy Wonka. WHOOSH!
So grab your gizzard! Hold your hats! Pay attention please. Mr Wonka wouldn't like to lose any of you at this stage of the proceedings . . .

And now you can listen to CHARLIE and other Roald Dahl audiobooks read by some very famous voices, including Kate Winslet, David Walliams and Steven Fry - plus there are added squelchy soundeffects from Pinewood Studios!

Also look out for new Roald Dahl apps in the App store and Google Play- including the disgusting TWIT OR MISS! and HOUSE OF TWITS inspired by the revolting Twits.

Quentin Blake is one of Britain's most successful illustrators. He has illustrated nearly three hundred books and he was Roald Dahl's favourite illustrator. He has won many awards including the Whitbread Award and the Kate Greenaway Medal and taught for over twenty years at the Royal College of Art. In 1999 he became the first ever Children's Laureate and in 2013 he was knighted in the New Year's Honours.
Save this product for later