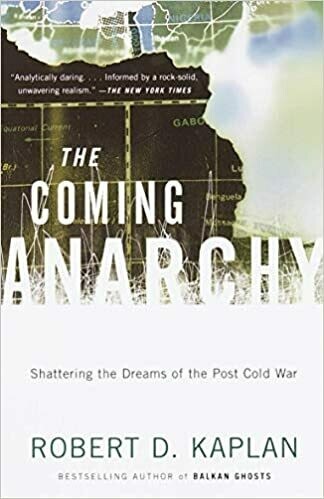 The Coming Anarchy: Shattering the Dreams of the Post Cold War

Robert Kaplan, bestselling author of Balkan Ghosts, offers up scrupulous, far-ranging insights on the world to come in a spirited, rousing, and provocative book that has earned a place at the top of the reading lists of the world’s policy makers.

"The breaking apart and remaking of the atlas is only now beginning. The crack-up of the Soviet empire and the coming end of the Arab-Israeli military confrontation are merely prologues to the really big changes that lie ahead," says Kaplan, who foresees a host of terrors in the wake of the Cold War. Volatile new democracies in Eastern Europe, fierce tribalism in Africa, civil war and ethnic violence in the Near East, and widespread famine and disease-not to mention the brutal rift developing as wealthy nations reap the benefits of the world slide into chaos- are among the issues he identifies as the most important for charting the future of geopolitics. Historical antecedents in Gibbon's Decline and Fall and in the legacies of statesman such as Henry Kissinger contribute to this bracingly prophetic framework for addressing the new global reality.

Robert D. Kaplan is the bestselling author of seventeen books on foreign affairs and travel that have been translated into many languages, including In Europe’s Shadow, Asia’s Cauldron, The Revenge of Geography, Monsoon, The Coming Anarchy, and Balkan Ghosts. He is a senior fellow at the Center for a New American Security and a contributing editor at The Atlantic, where his work has appeared for three decades. He was chief geopolitical analyst at Stratfor, a visiting professor at the United States Naval Academy, and a member of the Pentagon’s Defense Policy Board. Foreign Policy magazine twice named him one of the world’s Top 100 Global Thinkers.
Save this product for later