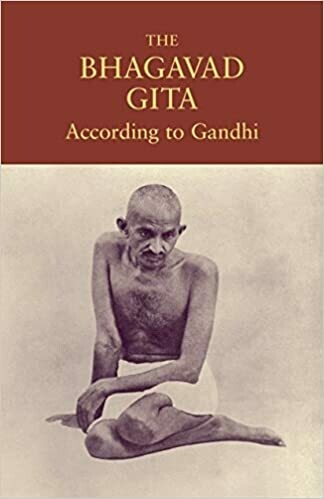 The Bhagavad Gita According to Gandhi

The Bhagavad Gita or "Song of God" is one of the world's great scriptures.The Story of the warrior Arjuna's battlefield conversation with the divine Krishna, it holds the universal essence of Hindu philosophy and wisdom.

Mahatma Gandhi's translation and commentary on the Gita, presented to his followers at prayer meetings over a nine-month period in 1926, is regarded in India as one of the most important of the twentieth century. In clear and simple terms, Gandhi addresses the concerns that most directly impact the spiritual lives of common people. He draws on his extraordinary life experiences and profound inner searching to illuminate what he describes as "the gospel of selfless action". His Gita is a call to detached service to others and devotion to God, for readers of every faith.

The edition is edited by John Strohmeier and contains a foreword by Michael N. Nagler, professor Emeritus of Classics and Comparative Literature at the University of California, Barkeley.

Mohandas Karamchand Gandhi (1869—1948) was a preeminent political and spiritual leader of India and the Indian Independence movement. John Strohmeier has edited numerous books on Gandhi. Michael Nagler is Professor Emeritus of Classics and Comparative Literature at UC Berkeley.