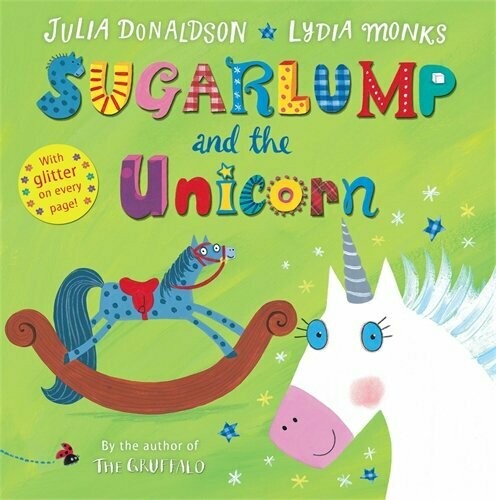 Sugarlump and the Unicorn

Sugarlump finds out when, with a flash of her eyes and a toss of her mane, a unicorn grants his wish. But for Sugarlump the excitement of the racetrack and the glamour of the circus prove no match for the fun of playing with children...

Is it too late to change his mind?

Julia Donaldson is the outrageously talented, prize-winning author of some of the world's best-loved children's books, including modern classics The Gruffalo and The Gruffalo's Child, which together have sold over 17 million copies worldwide, and the hugely successful What the Ladybird Heard adventures. Julia also writes fiction, including the Princess Mirror-Belle books illustrated by Lydia Monks, as well as poems, plays and songs – and her brilliant live shows are always in demand. She was the UK Children’s Laureate 2011-13 and has been honoured with an MBE for Services to Literature. Julia and her husband Malcolm divide their time between West Sussex and Edinburgh.

Lydia Monks is one of the most original and bestselling picture book artists working today. Lydia illustrates several bestselling series including the What the Ladybird Heard adventures and Princess Mirror-Belle, written by Julia Donaldson. Her distinctive use of colour and collage has won her critical acclaim and several awards, including the Royal Mail Scottish Children’s Book Award, the Stockport Children’s Book Award and multiple nominations for the Kate Greenaway Medal. Mouse’s Big Day, written and illustrated by Lydia, is the first book in her Twit Twoo School series. Lydia lives in Sheffield.