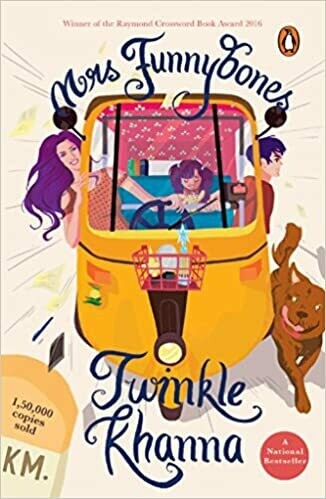 Full of wit and delicious observations, Mrs Funnybones captures the life of the modern Indian woman-a woman who organizes dinner each evening, even as she goes to work all day, who runs her own life but has to listen to her Mummyji, who worries about her weight and the state of the country. Based on Twinkle Khanna’s super-hit column, Mrs Funnybones marks the debut of one of our funniest, most original voices.

Twinkle Khanna, aka Mrs Funnybones, crafts satirical stories and funny fables when she is not running a design business, selling candles or running in circles around her small but rather odd family. She narrowly escaped a gruesome tragedy when Bollywood tried to bludgeon her brain to the size of a pea, but she ducked at the right moment and escaped miraculously unharmed. She is a popular columnist and is a regular contributor to The Times of India and DNA After Hrs. Currently, she is in the process of creating lame jokes like, ‘Why do all Hindu boys worship their mother? Because their religion tells them to worship the cow.’ She firmly believes that nothing in life is sacred except laughter.