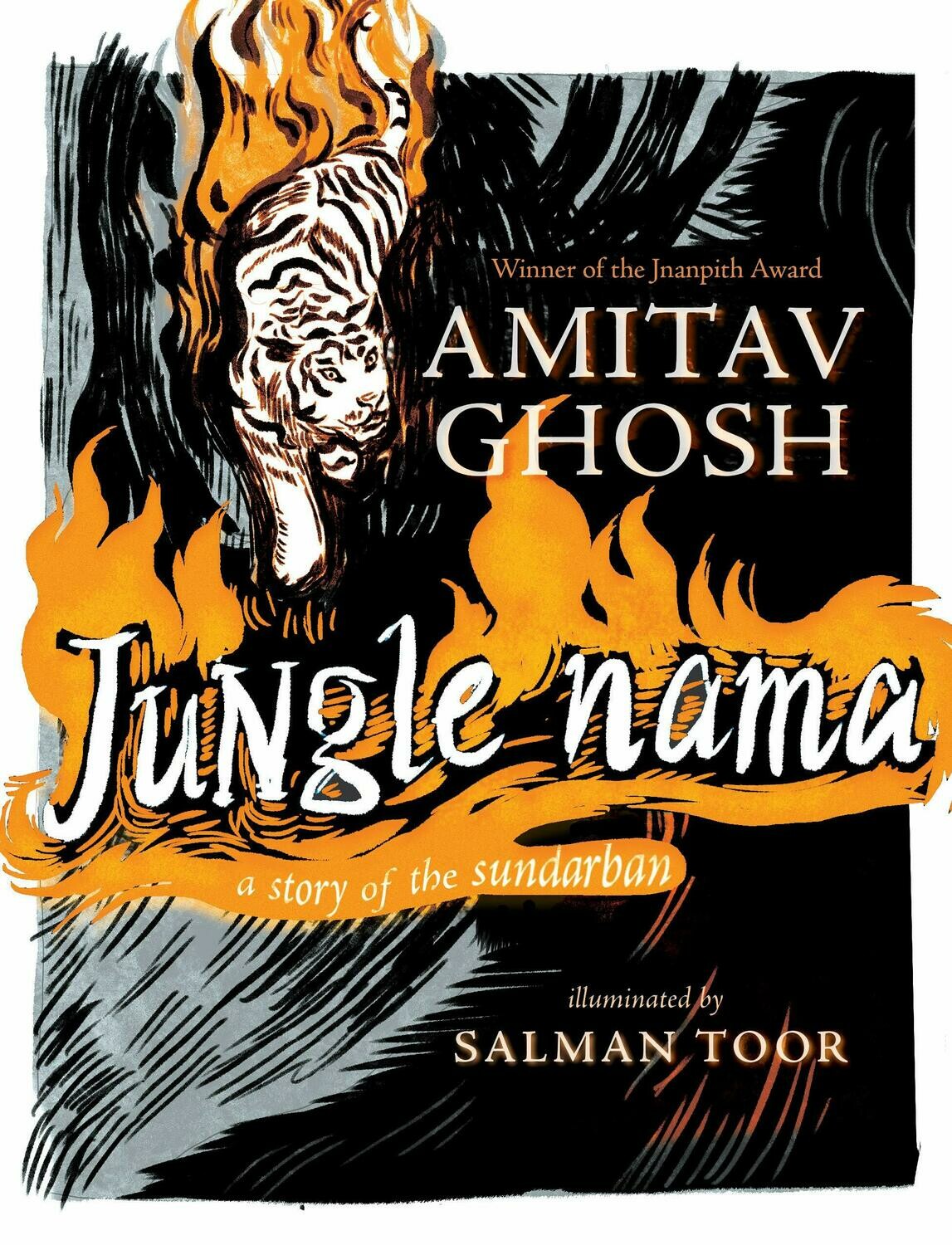 Jungle Nama: A Story of the Sundarban

Jungle Nama is Amitav Ghosh's verse adaptation of an episode from the legend of Bon Bibi, a tale popular in the villages of the Sundarban, which also lies at the heart of the novel The Hungry Tide. It is the story of the avaricious rich merchant Dhona, the poor lad Dukhey, and his mother; it is also the story of Dokkhin Rai, a mighty spirit who appears to humans as a tiger, of Bon Bibi, the benign goddess of the forest, and her warrior brother Shah Jongoli.

The original print version of this legend, dating back to the nineteenth century, is composed in a Bengali verse meter known as dwipodi poyar. Jungle Nama is a free adaptation of the legend, told entirely in a poyar-like meter of twenty-four syllable couplets that replicate the cadence of the original.

The first-ever book in verse by Amitav Ghosh, Jungle Nama evokes the wonder of the Sundarban through its poetry, accompanied by stunning artwork by the renowned artist Salman Toor. This is an illuminated edition of a fabulous folk tale that every book lover will want to possess.

Amitav Ghosh was born in Calcutta in 1956, and grew up in India, Bangladesh and Sri Lanka; he studied in Delhi, Oxford and Alexandria. He is the author of several acclaimed works of fiction and non-fiction including The Shadow Lines, In an Antique Land, The Glass Palace, The Hungry Tide, the Ibis Trilogy, The Great Derangement and Gun Island.

Amitav Ghosh's work has been translated into more than thirty languages. His essays have appeared in the New Yorker, the New Republic and the New York Times. He has been awarded and honoured across the world for his work. In 2019 Foreign Policy magazine named him one of the most important global thinkers of the preceding decade. The same year, the Jnanpith Award, India's highest literary honour, was conferred on him: he was the first English-language writer to receive the award.

Salman Toor was born in 1983 in Lahore; he lives and works in New York. He received his MFA from Pratt Institute in Brooklyn, NY. Salman Toor: How Will I Know, the artist's first institutional solo exhibition, opened at the Whitney Museum of American Art, New York in 2020. Toor's work has been featured in numerous group exhibitions and projects, including Duro Olowu: Seeing Chicago, Museum of Contemporary Art, Chicago; Are You Here?, the Lahore Biennale 2018; and the 2016 Kochi-Muziris Biennale, India. Toor is the recipient of a Joan Mitchell Foundation Grant, and his work is in the permanent collections of the Museum of Contemporary Art, Chicago; the Tate, London; M Woods, Beijing; and the Whitney Museum of American Art, New York.