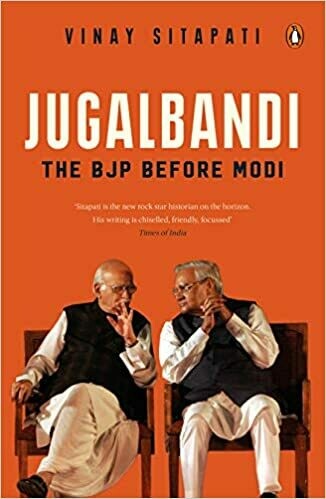 Jugalbandi: The BJP Before Modi

Narendra Modi has been a hundred years in the making. Vinay Sitapati’s Jugalbandi provides this backstory to his current dominance in Indian politics. It begins with the creation of Hindu nationalism as a response to British-induced elections in the 1920s, moves on to the formation of the Bharatiya Janata Party (BJP) in 1980, and ends with its first national government, from 1998 to 2004. And it follows this journey through the entangled lives of its founding jugalbandi: Atal Bihari Vajpayee and Lal Krishna Advani.

Over their six-decade-long relationship, Vajpayee and Advani worked as a team despite differences in personality and beliefs. What kept them together was fraternal love and professional synergy, of course, but also, above all, an ideology that stressed on unity. Their partnership explains what the BJP before Modi was, and why it won.

In supporting roles are a cast of characters-from the warden’s wife who made room for Vajpayee in her family to the billionaire grandson of Pakistan’s founder who happened to be a major early funder of the BJP. Based on private papers, party documents, newspapers and over two hundred interviews, this is a must-read for those interested in the ideology that now rules India.

Vinay Sitapati is a political scientist, lawyer and journalist. He has a PhD from Princeton University, and degrees from Harvard University and the National Law School of India University, Bangalore. His first book, Half Lion, was a best-selling biography of P.V. Narasimha Rao. Sitapati teaches at Ashoka University, near Delhi.
Save this product for later