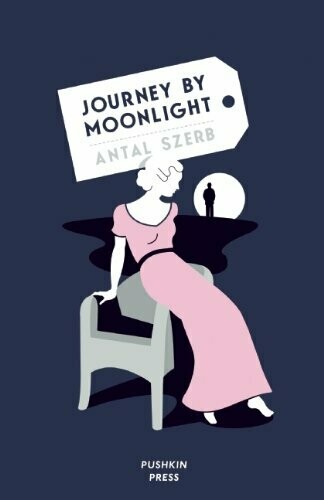 A major classic of 1930s literature, Antal Szerb’s Journey by Moonlight is the fantastically moving and darkly funny story of a bourgeois businessman torn between duty and desire.

‘On the train, everything seemed fine. The trouble began in Venice …’

Mihály has dreamt of Italy all his life. When he finally travels there, on his honeymoon with Erszi, he soon abandon his new wife in order to find himself, haunted by old friends from his turbulent teenage days: beautiful, kind Tamas, brash and wicked Janos, and the sexless yet unforgettable Eva. Journeying from Venice to Ravenna, Florence and Rome, Mihály loses himself in Venetian back alleys and in the Tuscan and Umbrian countryside, driven by an irresistible desire to resurrect his lost youth among Hungary’s Bright Young Things, and knowing that he must soon decide whether to return to the ambiguous promise of a placid adult life, or allow himself to be seduced into a life of scandalous adventure.

Journey by Moonlight is an undoubted masterpiece of Modernist literature, a darkly comic novel cut through by sex and death, which traces the effects of a socially and sexually claustrophobic world on the life of one man. Translated from the Hungarian by the renowned and award-winning Len Rix, Antal Szerb’s Journey by Moonlight is the consummate European novel of the inter-war period.

‘A writer of immense subtlety and generosity . . . Can literary mastery be this quiet-seeming, this hilarious, this kind? Antal Szerb is one of the great European writers’ Ali Smith

‘A novel to love as well as admire, always playful and ironical, full of brilliant descriptions, bon mots and absurd situations … it’s a book utterly in love with life’ Kevin Crossley-Holland, Guardian Books of the Year

‘Just divine … the kind of book that makes you imagine the author has had private access to your own soul’ Nicholas Lezard, Guardian

Antal Szerb (1901-1945) was a writer, scholar, critic and translator born to Jewish parents but baptized Catholic. Multilingual, he lived in Hungary, France, Italy and England, and after graduating in German and English he rapidly established himself as a prolific scholar, publishing books on drama and poetry, studies of Ibsen and Blake, and histories of English and Hungarian literature. At the age of 39, Szerb wrote an authoritative History of World Literature. He wrote his first novel, The Pendragon Legend, in 1934, followed by Journey by Moonlight in 1937 and The Queen's Necklace in 1943. These, and a collection of his short stories, Love in a Bottle, are also published in English by Pushkin Press. Szerb was killed in a concentration camp in January 1945.