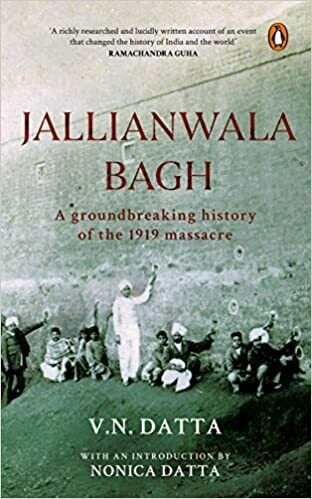 Jallianwala Bagh: A Groundbreaking History of the 1919 Massacre

Based on a meticulous exploration of the primary sources and oral testimonies of the survivors and victims of 1919, V.N. Datta crafts a unique and first-hand narrative of the most violent event and its legacy in the history of modern India and provides a complex picture of the city of Amritsar, where he grew up. Jallianwala Bagh is a rigorous account of the causes, nature and impact of the carnage that shook the nation and irreparably wounded its collective consciousness. A pathbreaking study that moves the focus away from the frames of imperialism and nationalism, Datta brings a local and an altogether different scholarly perspective on imperial racial and military violence in the twentieth century. This highly readable work in its revised edition is of tremendous historical and contemporary value.

V.N. Datta, a distinguished historian, is emeritus professor of modern history, Kurukshetra University and formerly general president of the Indian History Congress, resident fellow of Fitzwilliam College, Cambridge and visiting professor to a number of universities including Moscow, Leningrad and Berlin. Among his much acclaimed publications are The Tribune: A Witness to History; Jallianwalla Bagh (translated into Hindi and Punjabi); New Light on Punjab Disturbances, Vols I and II; Madan Lal Dhingra and the Revolutionary Movement; Gandhi and Bhagat Singh (translated into Tamil); Sati: A Historical, Social and Philosophical Enquiry into the Hindu Rite of Widow-Burning; Maulana Azad and Maulana Azad and Sarmad. He regularly contributes to academic journals and popular press and is currently writing a book on the 'History of Historiography'.