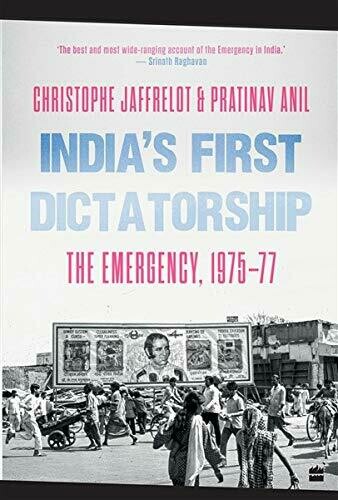 In June 1975 Prime Minister Indira Gandhi imposed a state of emergency, resulting in a 21-month suspension of democracy across India. Christophe Jaffrelot and Pratinav Anil explore this black page in India's history, a constitutional dictatorship of unequal impact, with South India largely spared thanks to the resilience of Indian federalism.

India's First Dictatorship focuses on Mrs Gandhi and her son, Sanjay, who was largely responsible for the mass sterilisation programmes and deportation of urban slum-dwellers. However, it equally exposes the facilitation of authoritarian rule by Congressmen, Communists, trade unions, businessmen and the urban middle class, as well as the complacency of the judiciary and media. Those who resisted the Emergency, in the media or on the streets, were few in number.

This episode was an acid test for India's political culture. While a tiny minority of citizens fought for democracy during the Emergency, in large numbers the people bowed to the strong leader in power, even worshipped her. Equally importantly, Hindu nationalists were endowed with a new legitimacy. Yet, the Emergency was neither a parenthesis, nor so much a turning point: but a concentrate of a style of rule that is very much alive today.

Christophe Jaffrelot is Research Director at CNRS, Sciences Po and Professor of Indian Politics and Sociology at the King's India Institute. His most recent (co-edited) book is Majoritarian State.

Pratinav Anil, a Clarendon scholar, is a DPhil candidate at St John's College, University of Oxford.