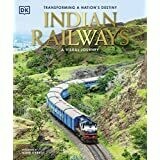 The railways did more than link India its metamorphosis into a network brought the nation together. This sumptuously illustrated adult reference book traces the history of the railways in India from the early plans of the 1830s, the laying of the first lines, and expansion into the interiors of the country to its role in India's momentous freedom movement, and the present era of speed. It does more than celebrate the awe-inspiring bridges, stations, tunnels, and locomotives. It traces the development of technology, dives into the operational and commercial aspects, and documents the railways' transition from a colonial tool of expansion and trade to an intricate system with a distinct national identity. Most of all, it tells the story of the people who built and planned the railways, their vision, the triumphs, tragedies, and their communities. The book is supported by the Heritage Directorate, Ministry of Railways, and the National Rail Museum, New Delhi and created with the support of a panel of railway experts including Sanjoy Mookerjee (retd. Finance Commissioner, Indian Railways), Manoj Pande (retd. Member (Staff), Railway Board), and JL Singh (retd. joint director, Indian Railways and secretary of the Rail Enthusiasts' Society.