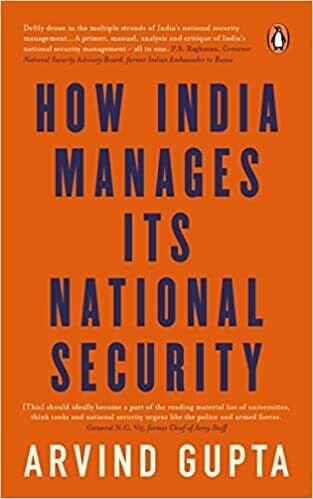 How India Manages Its National Security

In this authoritative and comprehensive survey of the challenges a changing global security environment poses to India, former deputy national security advisor Arvind Gupta outlines the important aspects of the country's security apparatus and how they interface to confront internal and external conflicts. We have today a turbulent Middle East to the west; a rising and assertive China to the north; Pakistan in the grip of the military and the militants across our border and an increasingly militarizing Indian Ocean region surrounding us. Additionally, climate change, cyber security and the vulnerability of our space assets are major areas of concern. Anything that weakens a nation weakens its security, which makes the issues of food, water, health, economics and governance critically significant. Arvind Gupta draws on his long experience in these areas to argue that instead of tactical remedies, a strategic, coherent, institutional approach is needed to deal with these challenges. Strengthening the National Security Council, for instance, could be one way forward.
How India Manages Its National Security explains with great clarity and thoroughness the concept and operation of India's national security apparatus. This book will be of great interest to practitioners, analysts and laymen alike and offer an important voice in the discussion on how national security challenges should be resolved in the decades to come.

Arvind Gupta was the deputy national security advisor and headed the National Security Council Secretariat in the Government of India from 2014-17. During 2012-14, he was director general of the Institute for Defence Studies and Analyses, New Delhi. He is a former diplomat. He is also an honorary professor in the Department of Defence and National Security Studies, Panjab University, Chandigarh.
He is currently the director of Vivekananda International Foundation, a Delhi-based independent, non-partisan think tank focusing on research on foreign policy, defence and security-related issues from an Indian perspective.