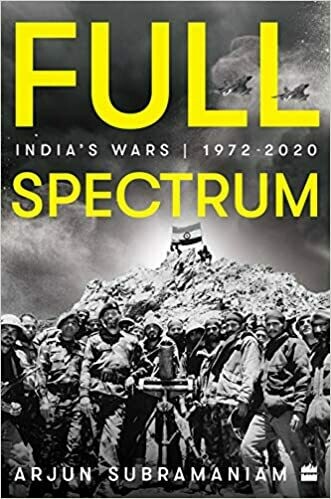 The armed forces have played a key role in protecting India's sovereignty and raising its stature as a stable democracy and responsible regional power. Though the nation's soldiers, sailors and airmen occupy a special place in people's hearts, standard narratives of contemporary Indian history rarely cover the military dimension. In his first book, India's Wars: A Military History, 1947-1971, Arjun Subramaniam attempted to set this right by taking readers on a journey until the liberation of Bangladesh in 1971.

Full Spectrum: India's Wars, 1972-2020 takes the story forward. It is a sweeping account of war and conflict in contemporary India over the past five decades. Covering every major operation that the armed forces have participated in - including insurgencies in the north-east, terrorism and proxy wars in Jammu and Kashmir, separatist violence in Punjab, the IPKF intervention in Sri Lanka, and the continued stress along the LoC and LAC - it fuses the strategic, operational, tactical and human dimensions of war and conflict into a racy narrative that reflects their changing character in modern times.

As deeply researched and passionately written as the previous volume, this is a befitting sequel that brings up to date a unique endeavour to offer a fresh take on independent India's history.

Arjun Subramaniam is a retired Air Vice Marshal from the Indian Air Force and an accomplished fighter pilot. Embarking on a second career as a military historian, academic and strategic analyst, he has taught at several universities. He is also the author of India's Wars: A Military History, 1947-1971.
Save this product for later