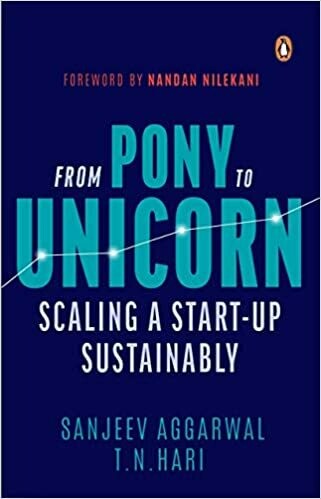 From Pony to Unicorn

The journey of a business-from a small start-up to a large company ready for an initial public offering (IPO)-is fraught with pitfalls and landmines. To scale a company, one needs to do more than just expand distribution and ramp up revenue. Scale entails a long-term vision that includes putting in place a timeline to achieve anticipated milestones, hiring and managing the right talent, sourcing capital to support expansion and building in simple yet effective processes as well as technology. Scaling requires the founders and the leadership team to understand the different pieces of the puzzle of scale and the components of organization-building.
From Pony to Unicorn lucidly describes the X-to-10X journey that every start-up aspiring to become a unicorn has to go through. The book effortlessly narrates the fundamental principles behind scaling. Peppered with anecdotes, insights and practical wisdom, the book is a treasure trove of lessons derived from the authors' rich personal experiences in both building and guiding several start-ups that went on to attain the 'unicorn' status and became public-listed companies. Guaranteed to make for a very interesting read, the book will be useful to entrepreneurs, leaders and investors involved in scaling start-ups.

Sanjeev Aggarwal is a lifecycle investor. He has seen the entire start-finish spectrum of multiple start-ups, from the ambiguities of their early years to the structural challenges of their growth years. He has spent three decades in the Indian technology sector. At the turn of the century, Sanjeev co-founded Daksh, a pioneer in BPO industry. Daksh was acquired by IBM in 2004 but Sanjeev continued to be the company's CEO till 2006. During this six year period, company grew to 20,000 people. In 2006, he co-founded Helion. It was the beginning of tech investing in India and Helion helped in creating a 'startup' ecosystem. In 2017, he co-founded Fundamentum with Nandan Nilekani, with a view to leverage his experience as an entrepreneur and investor to help build lasting institutions.
T.N. Hari is an angel investor, advisor and sounding board to numerous young entrepreneurs and startups. Hari has studied at IIT and IIM, and worked at an executive level with multiple start-ups/scale-ups. His strength and passion are in scaling organizations through clear thinking and relentless execution. LinkedIn identified him as one of the top voices in India for three years in a row (2016, 2017, and 2018). Hari is a prolific writer, and has co-authored four books before this one, most recently Saying No to Jugaad: The Making of Bigbasket.