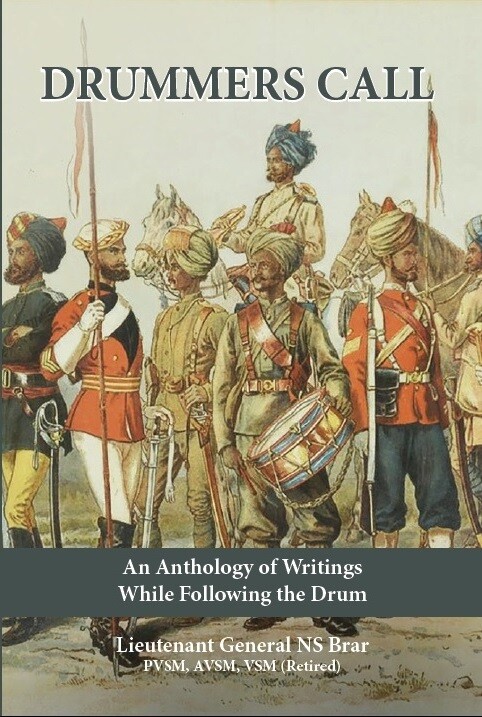 Drummers Call: An Anthology of Writings While Following the Drum

This anthology of military writings is an eclectic mix of personal experiences, historical events, evolution of military customs and traditions and folklore. It is the culmination of putting together long years of experience and observations as a soldier. The marshalling of extensive facts, figures, anecdotes and scattered information on select subjects makes it a unique compilation. It goes a long way in preserving much that has become obscured or forgotten with the passage of time.

All armies differ in their ethos, attitudes, values, motivation and the officers and men who make up the soul of the structure. The Indian Army, though a creation and legacy of the British, yet very much Indian in its approach to soldiering, lives, fights and dies for Naam, Namak and Nishan or it’s good name and honour, fidelity to the salt eaten and allegiance to the flag; all this embodied in the unique regimental system and comprehensively defined as Izzat. This thread runs through these writings.
Much as the soldier is held in high esteem by society at large, yet, paradoxically, there is very little understanding or insight into what his trade is all about. This immensely readable anthology helps generate such understanding for the uninitiated and deeper understanding for the professional.
Our Debut Author
Lieutenant General NS Brar was educated at the Rashtriya Indian Military College and was commissioned into the Regiment of Artillery, Indian Army in 1969. His military service spanning forty years included Gun Position Officer of a Medium Artillery Battery in 1971, an AOP helicopter pilot, Instructor in Gunnery, Staff Officer in Infantry Formations, Perspective Planning at Army Headquarters and command of a Corps. He superannuated as Deputy Chief of the Integrated Defence Staff.
He was appointed Colonel Commandant Regiment of Artillery and Honorary ADC to the President of India. Post retirement, he served as a member of the Armed Forces Tribunal for five years on its inception in 2009.