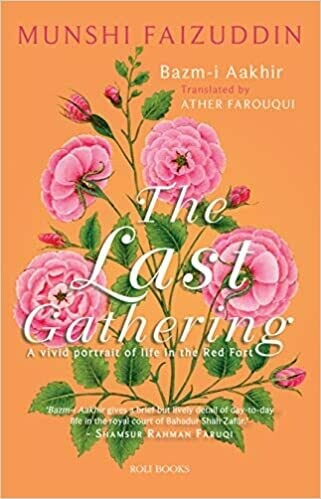 People of the ruling and rich classes keep their lives insulated from those of the ordinary people. Not only while living, but even after their deaths, they did not want to mix with others. Since this was the leftover of the dish of Shah Jahan (1592–1666), it is hardly surprising that its nature had to be unique. Ignorant young persons of the new generation will ask: “What were the things that were devoured by time, and which are no longer a part of our everyday lives?” May God have mercy on late Munshi Faizuddin. If he had not written this booklet, Bazm-i Aakhir, we would have no answer to give to the young of today.’ - From the preface by Ashraf Subuhi Dehlavi, published in the fourth edition of Bazm-i Aakhir, 1945

Ather Farouqui, translator, Bazm-i Aakhir, is a pioneering scholar of Urdu language and education. He was conferred the prestigious Sahitya Akademi Award in 2012 for his Urdu and Hindi translations of Sons of Babur (Babur ki Aulad), an English play by Salman Khurshid. Farouqui’s academic focus lies on aspects of Urdu, Urdu-related politics, as well as Muslims in contemporary India. One of his notable publications include the translation of The Life and Poetry of Bahadur Shah Zafar. He also edited Muslims and Media Images: News versus Views and Redefining Urdu Politics in India. His most recent publication, Delhi in Historical Perspectives, is a translation of essays on the historical and cerebral cultural life of the capital city by medieval Indian historian Professor K.A. Nizami. These days Farouqui is translating books of the nineteenth and early twentieth century related to the politics of the time and the syncretic culture of Delhi which evolved as a synthesis of over many centuries and synthesized innumerable regional influences from across the country.