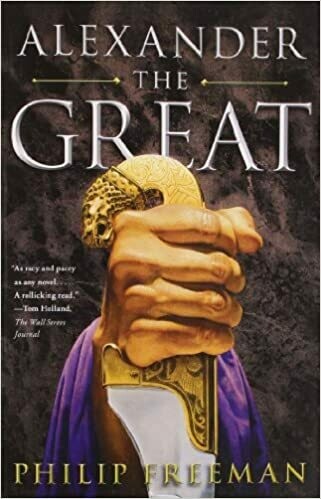 He was a general of such skill and renown that for two thousand years every great leader -from Hannibal to Napoleon- studies his strategy and tactics. He established the greatest empire of the ancient world, ruling over a kingdom that stretched from the deserts of Egypt to the mountains of present-day Pakistan. Crowned at age nineteen, he was dead by thirty-two. He was Alexander the Great, and in the first authoritative biography in a generation, Philip Freeman tells thee story of this greatest of emperors.

Born into the royal family of Macedonia, Alexander was tutored as a boy by Aristotle and had an agile, inquisitive mind. Shortly after taking command of the army, he launched an invasion of the Persian empire, the first in a series of military campaigns that went farther and farther east. In his efforts to unify his kingdom, he spread Greek culture throughout the ancient world. Within a short time after Alexander's death in Baghdad, however, his empire began to fracture.

In his lively biography classical scholar and historian Philip Freeman describes Alexander’s astonishing achievements and provides insight into the charismatic character of the great conqueror. Alexander made history as few individuals have.

Philip Freeman is Qualley Professor of Classics at Luther College in Decorah, Iowa, and a former professor of classics at Washington University in St. Louis. He was selected as a visiting fellow at the Institute for Advanced Study at Princeton for January 2012. He earned the first joint Ph.D. in classics and Celtic studies from Harvard University, and has been a visiting scholar at the Harvard Divinity School, the American Academy in Rome, and the Center for Hellenic Studies in Washington, D.C. The author of several previous books including Alexander the Great, St. Patrick of Ireland and Julius Caesar, he lives with his family in Decorah, Iowa. Visit him at PhilipFreemanBooks.com.
Save this product for later
Display prices in: INR