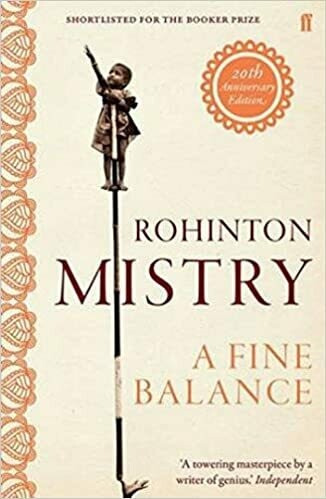 Set in the mid-1970s in India, A Fine Balance tells the story of four unlikely people whose lives come together during a time of political turmoil soon after the government declares a 'State of Internal Emergency'. Through days of bleakness and hope, their circumstances - and their fates - become inextricably linked in ways no one could have foreseen.

Written with compassion, humour and insight, A Fine Balance is a vivid, richly textured and powerful novel by one of the most gifted writers of our time.

Rohinton Mistry is the author of a collection of short stories, Tale from Firozsha Baag (1987), and two internationally acclaimed novels. Such a Long Journey (1991) won the Governor General’s Award, the Commonwealth Writers Prize for Best Book, and the SmithBooks/Books in Canada First Novel Award and was shortlisted for the Booker Prize. A Fine Balance (1995) won the prestigious Giller Prize, the Commonwealth Writers Prize for Best Book, the Los Angeles Times Book Prize for Fiction, and The Royal Society of Literature’s Winifred Holtby Award. It was also shortlisted for the Booker Prize, the International IMPAC Dublin Literary Award, and the Irish Times International Fiction Prize. Rohinton Mistry was the recipient of the 1995 Canada-Australia Literary Prize.

Born in Bombay in 1952, Rohinton Mistry came to Canada in 1975, and has lived since then near Toronto. His new novel will be published in 2002. --This text refers to an out of print or unavailable edition of this title.
Save this product for later